Traveling in Palawan: A Beach Hut in Busuanga

One of my dreams was to experience staying in a beach hut in a remote paradise. I figured why not look into this while in the Philippines. To be honest, I thought it was going to be easy to find this sort of thing in Palawan, but maybe I waited too long to book or have become rusty at finding places. There was no shortage of people telling me I paid too much or could’ve gotten something more “legit.” Thanks guys. Well you know what? I can’t hear you over this amazing view.

The plan was to slowly make my way north from El Nido, exploring the islands around Coron along the way. Unfortunately, this didn’t happen and so I went straight from El Nido to the northern coast of Busuanga island. This trip involved a 3 1/2 hour fast ferry from El Nido and then a 2 hour ride on a dirt road to the resort. IMPORTANT: If you are hoping to do an “expedition tour” or camping while hopping from island to island, you really need to book ahead of time. I thought I could book once I got there and was told it was hard to arrange so close to the date.

I chose Phimal Ferry, which leaves El Nido around 8:30 am and takes you to Coron Town, Busuanga. The ride was fairly smooth, but the seats are extremely small and packed very close together. I’m not a claustrophobic person by nature, but the boat definitely made me nervous. It was only 3 and 1/2 hours though and the price was around 1,800 pisos. There’s also a slower ferry and the ride will take anywhere from 5-10 hours depending on who you talk to. I was able to get all the information I needed and then book the tickets through my hostel. Try to do this a day or two before the trip. 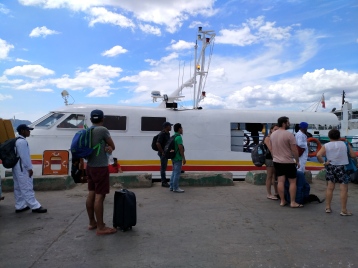 the seats were a bit cramped

I didn’t see much of Coron Town in the southern part of Busuanga, but it looked crowded and chaotic. From what I heard, it’s not the best place to be to experience Busuanga, BUT if you want to do some amazing tours of the islands it’s a great jumping off point. I had arranged for my resort to pick me up from the port so I was immediately whisked away and only got one picture of Coron Town market while they were buying supplies.

I didn’t get around the island much, but from what I saw on the drive north and the areas near the resort, the road (roads?) is a mess. It looked like they were trying to put down some asphalt and fix them up in some areas, but it might take awhile. Unfortunately, this meant that once I was at the resort, it was very difficult and expensive to get back to the port. Something to think about when deciding where to stay on Busuanga. 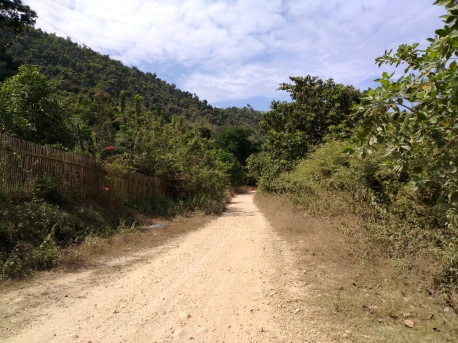 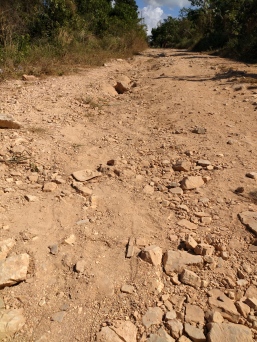 I’d rather not put the name of the resort out there, but here’s some information. Did I enjoy my stay? Yes, I did. Was it a really cool experience? Yes, it was. It was clean and secluded and extremely quiet. The staff and management were both very friendly and sometimes even conversational, which was nice because I was traveling alone.  And last of all, the resort was basically a bunch of huts along a private beach. However, being able to get out and do some diving and boat tours was very difficult, although that might’ve been my own fault for wanting to be as far away from civilization as possible. So now that you have my review, here’s the hut I’ve been ranting about.

the hut I rented at an expensive resort in northern Busuanga

As you can see, the huts were spaced apart enough that you had your privacy. They were pretty secure so no creepy crawly experiences. Also, they were a good size for a couple, which meant a lot of space for me, Ms. Super-Single-and-Not-Ready-to-Mingle. One cool and maybe slightly awkward feature of the hut was a bathroom with no roof, which was beautiful during the day, but unbelievably scary at night.

a beautiful view during the day!

going to the bathroom while outside? not so wonderful

seeing the sky while you shower? wonderful!

Other cute little features were the stone pools for rinsing your feet. They were located near the huts entrance and around the resort. They put fresh flowers in them every morning, which was very beautiful, but maybe not so practical because I kept stepping on them. 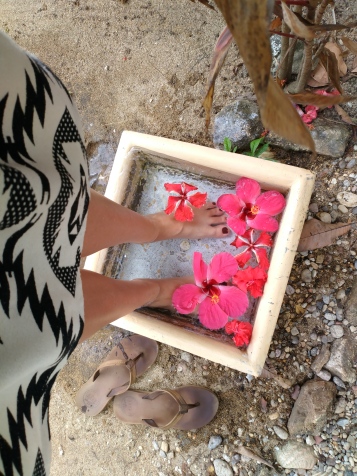 The best thing about the hut was the porch. I think it was the porch that made me go ahead and throw so much money at this adventure. There were two comfortable chairs to sit on, a table, and an amazing view. I spent most of my time here with a cold glass of Tanduay. Heaven…

OK so the most important thing for me was the beach. I wanted a nice sandy beach to lie on and some clear blue water to swim in. As you can see it was clean sand and it was very well kept so that was great. They even provided some soft reclining chairs to lie on. Only problem was where the beach ended and the water began was pretty much all shallow coral and rocks. It was kind of weird to see because my first day there I was tired and dazed and my view went from this…

I was a little bummed, but if you had the proper footwear you could wade out to deeper water. I didn’t bring any wading shoes, but I managed to paddle/crawl out. The water was rougher than usual so I didn’t get too far. It was an interesting place to explore in the morning during low tide though! 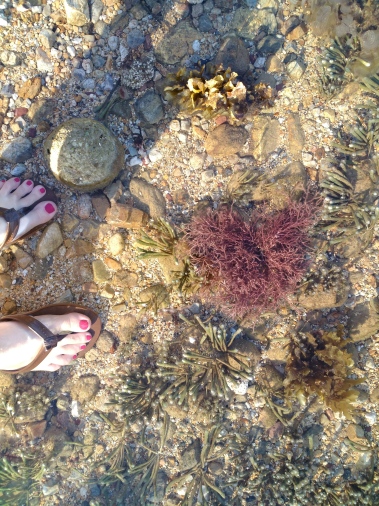 Fortunately, the resort had a pretty nice pool. It was a bit small, but it was very clean and well cared for. It was set back from the water and close to the restaurant area so it had a swim-up bar you could sit at in the pool. There weren’t many chairs, but it didn’t really matter as the resort was small and never got crowded.

the pool next to the meet and greet area/restaurant

the bar in the pool

the other side of the bar closer to the restaurant

I guess I should say something about the food. I forgot to take a few pictures of the dinner or breakfast because I usually just carried a book. Breakfast was the only meal that came free with the room and it was a moderate amount; eggs with fried rice or toast and some fruit. The lunch and dinner were a bit pricey so I would choose one or the other. The missing meal I just replaced with some nuts, dried fruit, or some beef jerky I brought. Overall, it was enough food for me, but I mostly laid around all day. 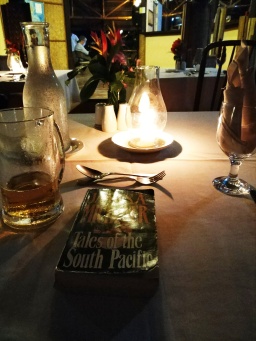 the most awkward candlelit dinner ever 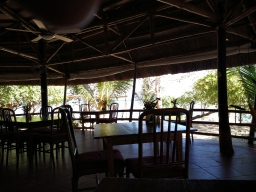 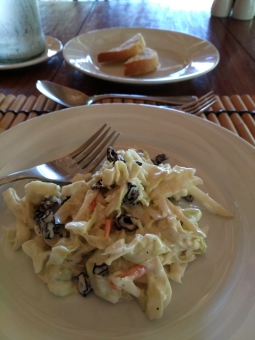 Lunch always started with a kind of salad

Lunch was usually rice or pasta with a veggie side

Typical set and it changed everyday 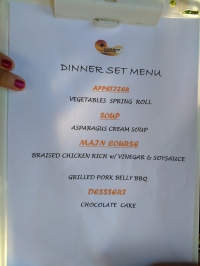 the dinners were quite fancy

The other thing there was plenty of in the room were those 3 in 1 coffee packets. I soon found out that they went really well with the local Tanduay rhum! When I wasn’t relaxing with my spiked coffee I went on a few adventures in the area near the resort. There was actually quite a bit to see and do so missing out on a few boat tours or diving trips didn’t really bother me. I’ll give some information on what to do in the area in the next post.

* I didn’t list prices because they might change depending on the season. It’s best to research the hotel you like and GIS some pictures online before making your decision.