If you remember the earlier post about meeting my friend in Taipei to do some random sightseeing then Good Job! You have an excellent memory and are obviously one of my fans. Thank you 🙂

If not, then you can find the first part of the story in “A Sunny Day in Taipei” which describes a daytrip with my German friend Volker, who I met about 10 years ago in Vietnam. Small world right?

Anyways, we had just finished a long walk from the Chiang Kai Shek Memorial Hall to a random Family Mart near Longshan Temple. What was supposed to be a short break turned into a long conversation and a lot of reminiscing. After getting sidetracked by a few cans of beer we decided to forget Longshan Temple and just go straight to a night market instead. You know, priorities. Now I’m not exactly sure how many night markets Taipei has, but I do know one of the largest and most popular is Shilin Night Market. We decided to get good and hungry (and sober) by taking the MRT instead of a taxi. 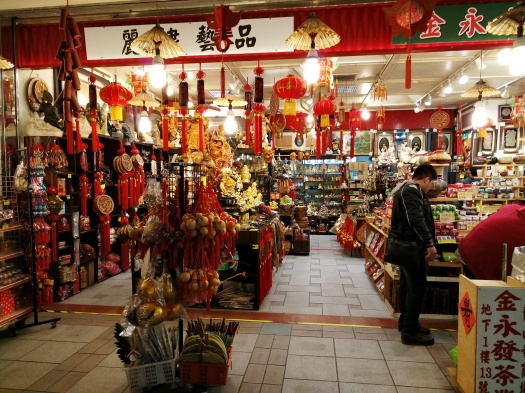 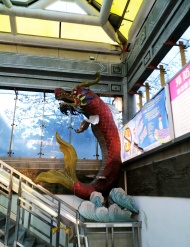 As you can see, I love the giant amethysts they have here. They’re quite popular. My goal is to own one someday. Apparently, they’re great for creative thinking. 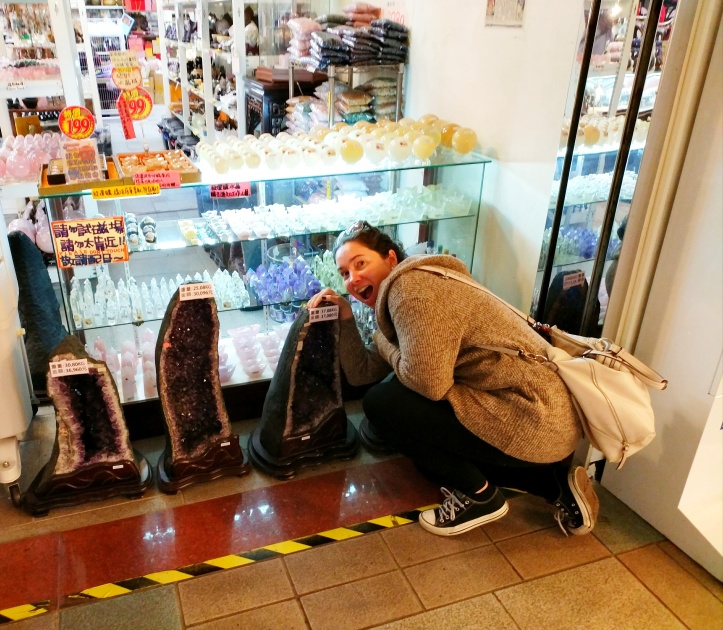 To get to Shilin Yeshi (Night Market) take the Tamsui-Xinyi Line (Red) and get off at the Jiantan stop, which is only about 70 meters away. There is also a Shilin stop, but it’s a bit further up and not as convenient. Once you leave the Jiantan station just turn right and you should be able to see it. And smell it! 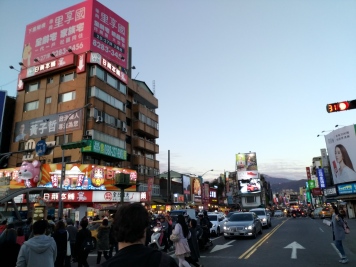 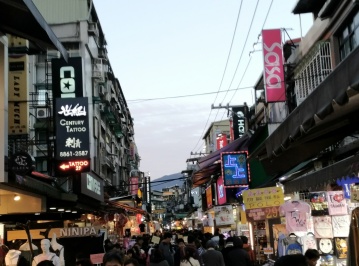 Heading to the night market from Jiantan is a crowded and hectic affair even on the slowest days. Coming into the market, you can pretty much get an idea of what the experience is going to be like… 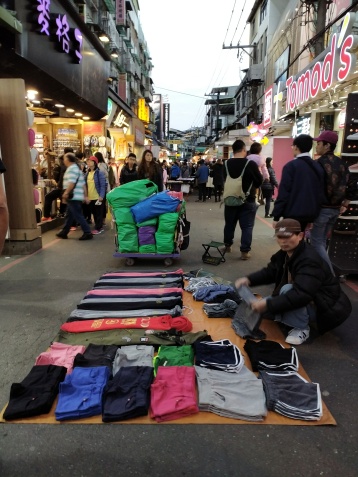 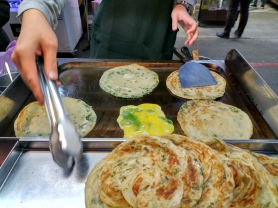 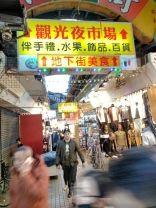 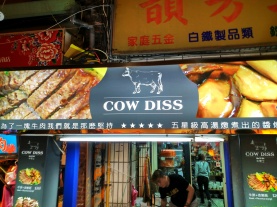 Walking from this direction (Jiantan) usually means you’ll be exploring the alleys and smaller side streets first. They eventually connect to a larger building that’s mostly full of arcades and games, but you can find food there too. There’s also a parking lot on the 2nd floor and Volker and I discovered a basement area full of sit down restaurants. Always something new! It’s a claustrophobic nightmare of pushing and shoving, but people are generally courteous. The food is a great distraction and you can eat as you walk without anyone minding. Just make sure you don’t hit anyone with it! Here’s a nice organized list of everything we ate while exploring Shilin. 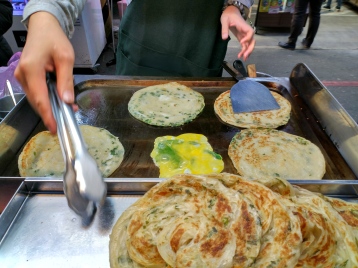 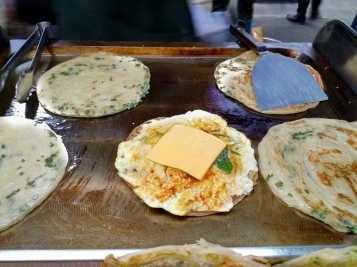 This is one of my most favorite foods here in Taiwan. Everytime I have moved, my first order of business is locating the nearest cong you bing stand. It’s basically a flaky crepe that has green onions chopped and folded into it. It’s placed onto a frying egg to cook together, slathered with a sweet sauce, a salty sauce, and then rolled up. You can get fillings added like tuna, bacon, cheese, basil, etc… As you can see I like the cheese and basil. Hao chi!

This is another favorite and one of the most popular Taiwanese snacks. In fact, my friend was insistent that he try one as soon as possible! It’s basically eggs cooked with lots of small oysters. What makes it special is the preparation. Usually some lard is heated in a pan and the oysters are added to cook for a bit. Then, a thick substance made out of water and potato starch (or flour) is poured on. After that, the egg is scrambled in, cooked and flipped onto some lettuce or rocket. Once the big sloppy gelatinous mess is on the plate, an unusual savory pink sauce is poured on. DELICIOUS. 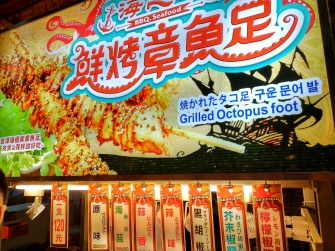 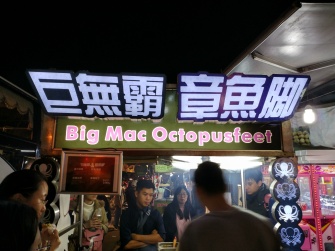 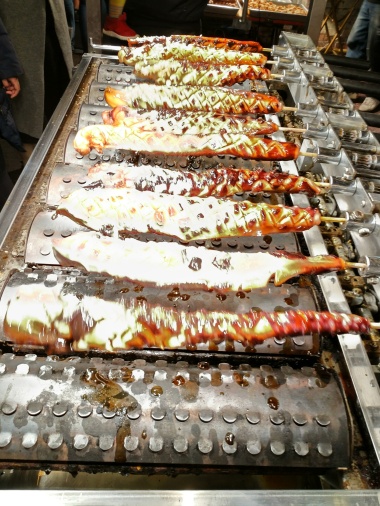 I couldn’t get a great picture of the ‘feet’ in motion. Also, the size of them isn’t very clear here. Either way, they’re pretty big and can easily be shared between two people, especially if you’re in the middle of a snackapalooza. The octopus tentacles are slit open, based with some sauce, and continuously turned over high heat. They take a surprisingly long time to cook and we actually went walking around after ordering because it took so long. They are very chewy and the different sauces add a surprising amount of flavor. 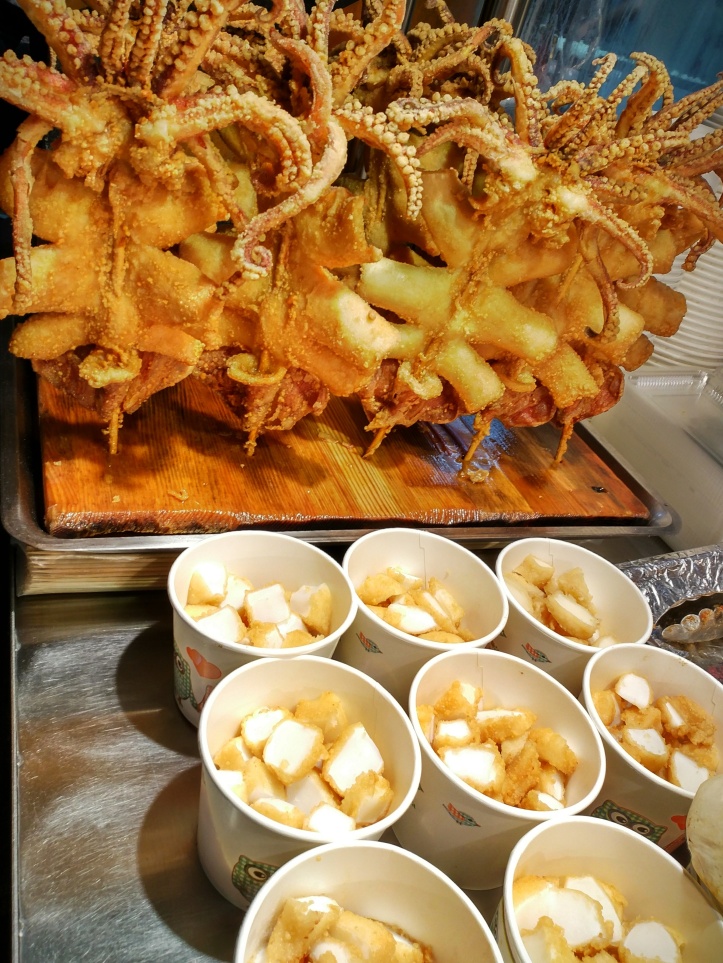 This is another very popular snack in Taiwan. You can pretty much find either deep fried squid or dried squid jerky anywhere on the island. Even outside some nightclubs, no joke. It’s usually sold whole, which can be a little disconcerting, but after the delicious oily goodness hits the taste buds, I’m sure the appearance will be forgotten. As you can see here, Shilin vendors usually cut them up into easily carried cups. Again, the picture doesn’t do the size of these things justice. They’re probably the size of my head. Yummy, juicy head sized squid. 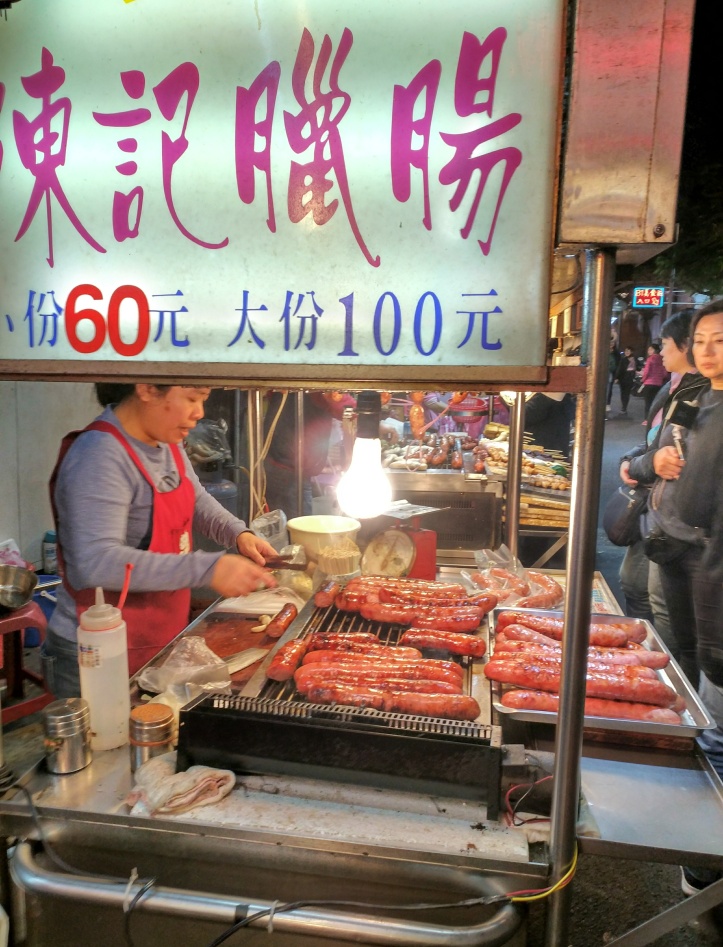 Taiwanese sausage can be a little surprising for some people. I wasn’t much of a meat eater for quite a long time and so when I tried it, I thought it had an interesting and complex flavor. I do enjoy them and one of my guilty pleasures is going to Carrefour every now and then and getting one of the large ones if they’re on sale in the deli. People who don’t care for them say the flavor is a bit sweet and has very “herbal” taste. They are extremely oily and you either eat them plain on a stick or placed in a kind of hot dog “bun” made of another sticky glutinous rice sausage. Literally a sausage inside a sausage! 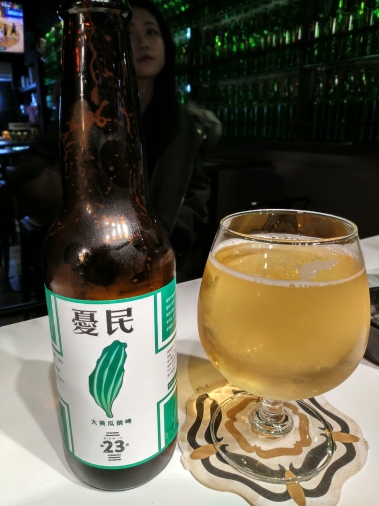 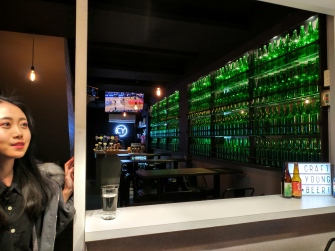 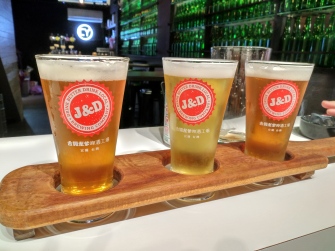 There’s been a pretty happening craft beer scene going on all over the island for the past few years. We spent most of our time wandering the night market with Taiwan beers in hand, but then we stumbled on this cute little open bar. We were able to sit outside and people watch, while sitting and talking our favorite subject (beer) with the staff. One of the beers being offered was a seasonal sour beer from 23 Brewing Company, a very popular name and one of my favorites! 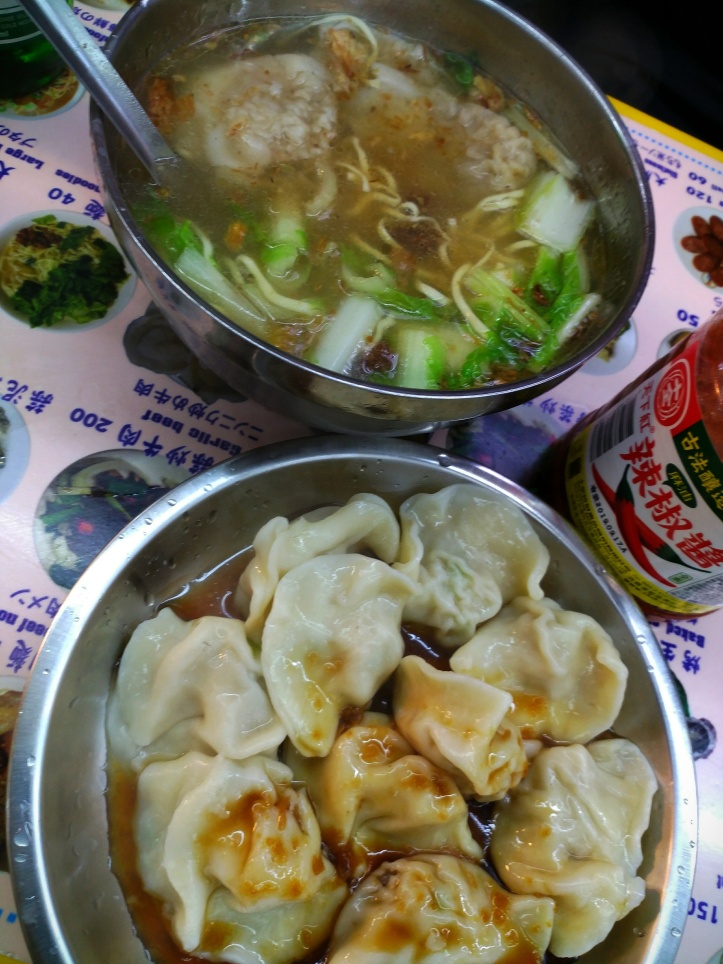 What better way to end a list than with some beautiful dumplings for lucky number 8. And what would a trip to a night market, or Taiwan for that matter, be without trying some dumplings! They’re pretty much everywhere and easy to order. They generally come in groups of 10 and then increase by twos. They’re pretty cheap no matter where you go. I’ve even seen an order of 100 dumplings for 250NT! We found these in the food court area in the basement of the older Shilin Market building. All of the restaurants were pretty much the same. The menus even had some English so we could get a better idea of what we were ordering. It was a nice quiet spot after a lot of food and a lot of drink. 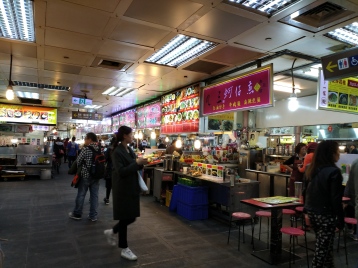 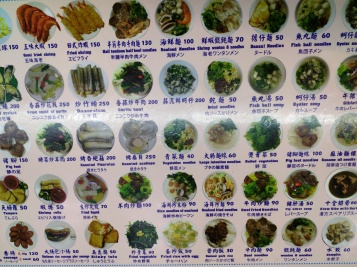 But I’m not hungry…

If you’re not into Taiwanese food (hey it happens) or just don’t feel like going on a binge fest, then there’s plenty more to see and do. One of my most favorite past times in the night markets is actually looking at the different clothes and the sometimes hilarious artwork and prints on them. 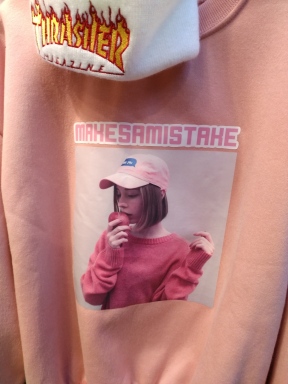 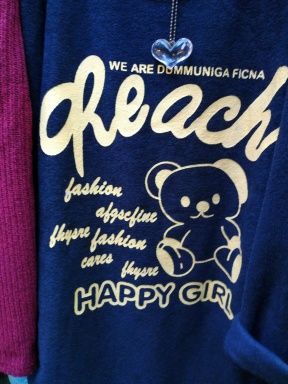 In the older building that used to house the night market there are a number of arcade games and other carnival type activities like ring toss, a giant catch the fish, and target shooting, but with VERY real looking guns. 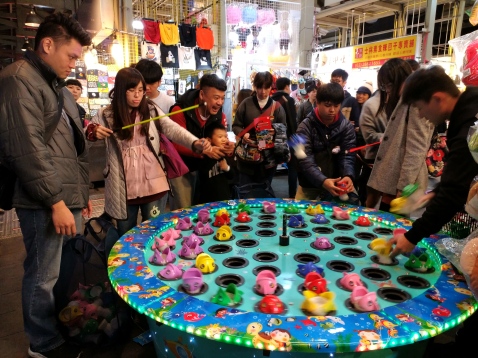 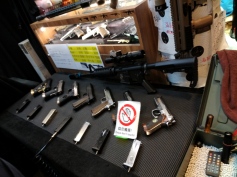 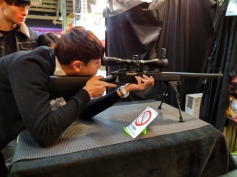 And if you’re more into risk then there’s Mahjong and claw machines galore. 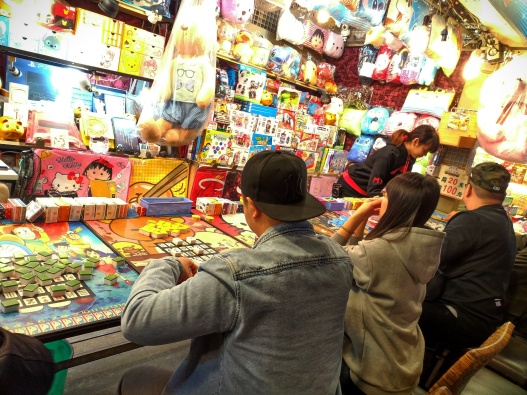 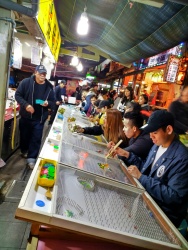 Shilin is always a hit with my visiting guests and even when it’s unbearably crowded we have managed to find a way to avoid getting too overwhelmed. Also, it’s a pretty safe place, like all of Taiwan, and while I’m sure petty crime happens, I’ve never had any problems in my many visits. Just be smart and watch your valuables and be polite! Hope you enjoy your visit!